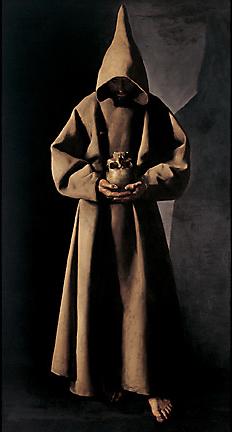 I recently completed the 12 lectures on Francis of Assisi made available through The Great Courses series.  I specifically listened to the lectures through Audible via Kindle, where I believe you will be able to purchase them more cheaply than if you get them through The Great Courses directly.  The lectures are engaging and are delivered in a tag-team and largely conversational manner by William R. Cook and Ronald B. Herzman, both of the State University of New York in Geneseo.

Here are the twelve lecture topics:

1. Why Francis of Assisi Is Alive Today
2. The Larger World Francis Inherited
3. The Local World Francis Inherited
4. From Worldly Knight to Knight of Christ
5. Francis and the Church
6. Humility, Poverty, Simplicity
7. Preaching and Ministries of Compassion
8. Knowing and Experiencing Christ
9. Not Francis AloneThe Order(s) Francis Founded
10. Not Men AloneSt. Clare and St. Francis
11. The Franciscans After Francis
12. A Message for Our Time

Despite the fact that Ronald Herzman says “kind of” a LOT and William Cook says “sort of” a LOT, these lectures are very, very good.  They are basically introductory in nature, though even those familiar with the story of Francis will benefit from many of their points and interpretations regarding Francis and his life.  They provide very helpful information about the cultural realities of Francis’ day and about how the Franciscan movement must have appeared at that time.  Their discussion of Claire was extremely interesting and I learned a great deal from it.  Furthermore, I thought that the two presenters did a very good job discussing the movement in the years following Francis’ death.

I suppose more than anything I really appreciated the respectful tone of the presenters.  They clearly appreciate Francis though they do not indulge in hagiography.  Neither do they exhibit any hyper-skeptical materialism.  For some reason, I expected to hear some of this.  I did not.  I know not if the presenters are believers, but they handled the story of Francis and what he stood for very fairly and very, again, respectfully. 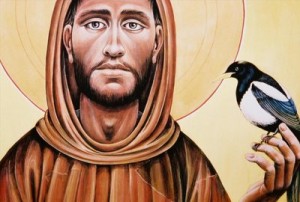 From June 6-7, a number of men from Central Baptist Church, North Little Rock, spent time in a retreat at Subiaco Abbey in Subiaco, Arkansas.  This was the first of what I intend to be annual “Mighty Men of God” retreats in which men consider the lives of great men from Christian history.  This year we considered the life of Francis of Assisi and what his example can show us about what it means to follow Jesus.  To that end, I put together a workbook highlighting four episodes from Francis’ life.  I am providing the Leader’s Guide of the workbook here, as a pdf.  I hope it encourages and challenges you.

Chesterton’s little biography of St. Francis is essential reading, not only because of its penetrating insights into the magnificent person of Francis but also because of its insights into the magnificent person of Chesterton.  It is not a conventional biography, but then it is not a conventional subject, much less a conventional author. (See how you start sounding like Chesterton when you type right after reading Chesterton?! Ha!)  Rather, it is a spiritual biography of Francis of Assisi that seeks to explore a matter more interesting than the details surrounding his life, mainly, Francis’ actual mind and heart.

The book does assume some knowledge of Francis, but, in truth, enough of the rudimentary details of his story are provided where the reader with no knowledge of Francis will not be completely lost.  Still, if Chesterton’s approach is confusing, it may be better to read one of the more fundamental biographies available today, probably Omer Englebert’s work (which is at least available on ebook format).

What Chesterton does (with uncanny but, for him, typical brilliance) is draw the reader into the mind-boggling simplicity and singleness of vision that characterized Francis’ view of life after breaking with his old way of life as the son of Pietro di Bernardone.  Chesterton treats Francis sympathetically, describing him as a man who, quite literally, started over.  When Francis gave himself to God, embracing the principles of poverty, charity, and obedience, he did so with a startling purity and, some might say, naiveté.  Chesterton is at his best when defending this naiveté.  He recognizes the danger of trying to institutionalize or force these virtues on all of Christendom in the way that Francis embraced them personally, arguing that it was more necessary for Francis to be absorbed into Christendom than for Christendom to be absorbed into Francis, but he sees Francis nonetheless as a necessary and crucial reminder and challenge to the church and the world.

Along the way, Chesterton rightly skewers the skepticism of the modern world, specifically regarding the more fantastic stories surrounding Francis (which Chesterton, himself, does not necessarily buy hook-line-and-sinker), but more generally regarding the modern penchant of swallowing camels and straining on gnats.  He is right to do so, and Chesterton is at his best in pointing out these modern hypocrisies.

Above all, however, this book, more than any Chesterton book I have ever read, is amazingly inspirational.  There are times when your heart soars reading a book like this.  I suspect that part of this is the similarity between Chesterton and Francis.  Now, of course, there are MANY dissimilarities.  Chesterton could not be called a champion of self-discipline and restraint!  However, they both maintained a kind of childish wonder at the world that God has made.  They both evidenced a purity of faith.  They both, in a sense, lived lives quite against the current of the cultures into which they were born.  One can imagine Chesterton laughing at a bird just as easily as one can imagine Francis doing the same, and both from the same deep theological storehouse.

Chesterton is no Francis.  Chesterton himself would say that very quickly.  But it is hard to imagine a writer who could understand Francis like Chesterton did, or who, in ways fascinating and compelling, saw the world in the same way.

This a very good book.

In Francis of Assisi: A New Biography, Dominican friar Augustine Thompson has set out to offer a biography of St. Francis free of the mythological encrustations that inevitably latch onto figures of Francis’ spiritual stature.  When I first read that this was Thompson’s stated purpose, I grew very cautious.  This is not because I do not agree with a myth-free Francis.  On the contrary, I am very much in favor of such because (a) I believe we ultimately do a disservice to our heroes when we romaticize them and (b) because the undeniably historical aspects of Francis’ life are in and of themselves so astounding that they should render the desire for attractive glosses undesireable anyway (and, of course, such glosses are always inappropriate, if still understandable).  No, my concern was that Thompson’s modus operandiwould be a cover under which he would apply extreme skepticism and reductionism to the life of the beloved Francis.

I was pleasantly surprised to discover that Thompson is no unjust skeptic.  In fact, I believe he has produced one of the stronger Francis biographies out today.  His approach is sober but respectful.  While he does not allow sacred and beloved myths about Francis to go unchallenged, neither does he lapse into mere incredulity just because a particular instance in Francis’ life seems surprising or even unlikely.  Case in point would be Thompson’s handling of Francis’ alleged stigmata.  His approach is respectful, if cautious.  Ultimately, he finds no reason for doubting that something very odd and very physical happened to Francis, and he dismisses skeptics who dismiss the stigmata simply because they find the idea offputting.

Thompson tells Francis’ basic biography very well.  He handles the wider political and ecclesiastical realities surrounding Francis adeptly and in a helpful manner.  I felt that Thompson really shined in his examination of the innder dynamics of the growing Franciscan movement.  Furthermore, I feel like I learned a good bit about the awkwardness surrounding Francis’ desire to be a “lesser brother” to his fellow monks.  He wanted to be subservient, but, in practice, this proved very difficult given Francis’ stature as the founder of the movement.

Thompson has presented a very human portrait of Francis, and I enjoyed it very much.  I believe he achieved his goal of historical accuracy.  However, he clearly respects his subject and never lapsed into crass dismissiveness simply because many of the events surrounding Francis’ life were remarkable.

After all, Francis was a remarkable man…though Francis, no doubt, would respond, “No, but I have a remarkable God.”

And, of course, he would be right.

Apologia: Sermons Preached in Defense of the Christian Faith

On Earth As It Is In Heaven: Reclaiming Regenerate Church Membership

Walking Together: A Congregational Reflection on Biblical Church Discipline

“The Three Tables: A Proposal for the Organization of Deacon Bodies" Deacon Magazine

“Chesterton and the Baptists" The Chesterton Review

“Indifference or Compassionate Action?” and “Being Served or Serving?” (Commentary/Bible Studies for Life) Arkansas Baptist News

"The Question of Close(d) Communion" The Arkansas Baptist News

"Timothy George and Reading Scripture With the Reformers" The Founders Journal

"Baptist Theology With James Leo Garrett: An Interview and Review" The Founders Journal

"More Than Worth It: Costs and Benefits of Church Discipline" 9 Marks eJournal

"The Rule of Christ and Congregational Polity: A Unique Challenge and Opportunity" The Southwestern Journal of Theology